Main page
About Security Service of Ukraine
News
Search
To the public
For media
Укр.   Eng.

Russian political and military leadership intentionally hides from its people huge casualties of mercenaries in the hybrid war in Ukraine and Syria. Ihor Huskov, the Chairman of the SBU Head’s Office stated this at a briefing.

SBU continues to inform the public about the crimes and losses of the Wagner PMC mercenaries. The data collected by the Service are confirmed by numerous journalistic investigations of leading global and national media.

In February 2018, there was information about the huge losses of the Wagner PMC in Syria during the so-called “Prigozhin’s offensive” in the Syrian province of Deir-ez-Zor. “SBU has established and identified 206 mercenaries who were directly involved in this case,” said Ihor Huskov.

Documents available at the SBU show that at least 80 of them were killed, another almost 100 - injured, with various severity. “Today, we release the first part of the available at SBU and verified by us information, namely, personal data of 40 killed and 30 wounded, as well as a “dossier” on foreign citizens participating in these events,” said the Chairman of the SBU Head’s Office.

After the media published information about several killed mercenaries, the highest leadership of Russia gave a cynical command to completely hide the data about the losses from the Russian public - the day before the Presidential election. The Russian leadership was reporting outright lies to the relatives of the killed - that the latter “gone missing”, and that premature leak of this information “would harm the search.”

Only after the Presidential elections in Russia, relatives of killed mercenaries - one by one, in strict secrecy - began to receive coffins with the bodies of their relatives, while still being blackmailed with a chance of “non-payment of monetary aid for the death of the mercenary in the event of disclosure”. At the same time, in order to conceal huge losses, in February, Russian intelligence services have developed an operation on “equal dispersion of losses" to create an impression that mercenaries allegedly perished over a protracted period of time.

Among the wounded in the Syrian province Deir-ez-Zor, there is a militant suspected by the SBU in involvement in downing the IL-76 cargo aircraft of Ukrainian Air Force on June 14, 2014 near Luhansk (and killing 49 Ukrainian servicemen). His identity has been confirmed - Lebediev Andrei Nikolaevich, senior AA sniper (shoulder-fired air-defence weapon),as was announced at briefing in October 2017 by the SBU Head Vasyl Hrytsak. 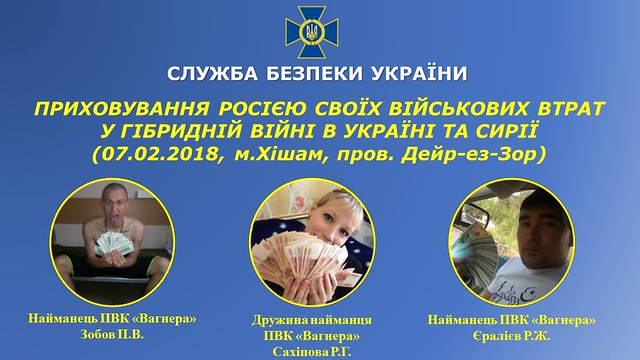 The Security Service of Ukraine also established that in February 2018, mercenaries from other countries - including Belarus, Kazakhstan and Moldova - got wounded, too. “We passed this information to our partners, because the mercenary activities of their citizens in the Wagner PMC is a crime under the legislation of either country,” the Chairman of the SBU Head’s Office said. In addition to earlier published information about the Serbian mercenaries, the SBU exposed as members of the Wagner PMC some 11 citizens of the Republic of Belarus, including six who participated in the so-called “Prigozhin’s offensive”, four representatives of the Republic of Moldova, two citizens of the Republic of Kazakhstan, and one each from Armenia and Uzbekistan.

SBU repeatedly cited concrete facts when saying taht many Wagner mercenaries have previous criminal history, in particular, in serious crimes. “This is a systematic approach to PMC recruiting, because “specific tasks” require from mercenaries “criminal-level morals,” said Ihor Huskov. The most recently identified persons include a revolting example of a Cossack merc Eugene Akimochkin from Armavir, who turned out to be a rapist. Despite the criminal proceedings, he departs for Syria as a member of the Wagner PMC.

Thanks to SBU materials, the global community begins to understand that the Russian intelligence services continue to secretly and illegitimately, even under Russian law, use the so-called Wagner PMC for achieving geopolitical goals of the Kremlin around the globe. “By involving foreign citizens, Russian intelligence agencies are trying to create a skilled reserve for starting hybrid war in other countries,” emphasized the Chairman of the SBU Head’s Office. The Russian authorities deliberately and cynically hide, first of all, from their own civil society, the massive death toll of Russian mercenaries in Ukraine and Syria, resorting to the outright lie of officials and intimidating the relatives of the dead.

During the briefing, only part of the available information was made public. The SBU would continue informing the public about Russian soldiers, Russian intelligence agents, mercenaries involved in crimes against the peoples of Ukraine and other countries.

For the Attention of the SBU Head